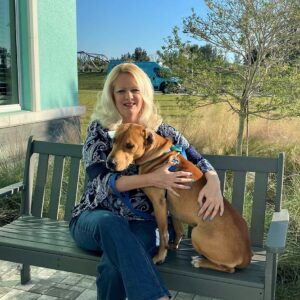 Liz McCauley, a native of Pennsylvania, became the first Executive Director of the Cape Coral Animal Shelter in June of 2019.  With over 30 years of experience and a master’s degree in Business with a specific concentration in Non-profit Leadership and Management, Liz was instrumental in setting up all aspects of the shelter prior to opening in March of 2020.

In 2007, while adopting her first dog from a local shelter, a staff member told her he was most likely a “puppy mill breeder dog”.  From that moment, Liz’s life was forever changed, and she has spent the last 14 years fighting to strengthen the animal cruelty laws nationwide through tougher legislation and educating people about animal neglect and abuse.

In 2015, Liz became the Executive Director of one of the largest open admission animal shelters in Eastern Pennsylvania where she had previously served on the fundraising committee, the board of directors, and as a foster.  During her tenure, she led the organization in expanding the foster program, developed relationships with other rescues, implemented new programs and procedures, and substantially increasing live release rates for both dogs and cats—an extremely difficult task for a shelter that is responsible for county-wide animal control.  Liz became a Pennsylvania Humane Police Officer in 2016 and assisted with animal cruelty investigations throughout the region.

In March of 2018, Liz took the job as Shelter Manager for the Gulf Coast Humane Society. Striving to ease the burden placed on animal control facilities throughout Florida, Liz developed relationships with rescue partners and worked tirelessly to save unwanted, abandoned, and abused animals.

Her passion for animals, experience in rescue, and education in the non-profit sector will help guide CCAS as we fulfil our mission to save and protect the animals of our region and find them forever homes. Liz resides on Pine Island with her husband, Bobby Mierzejewski and three misfit rescues—Rat Terrier/Australian Cattle Dog, Buckey, Chihuahua/Schnauzer, Oliver, and Chihuahua Mix, Lucy.

Melanie Waite joined the Cape Coral Animal Shelter as the Director of Operations in November of 2019 and was instrumental in establishing all clinic and shelter protocols. In 2009, Melanie graduated from the PIMA Medical Institute in Albuquerque New Mexico as a Certified Veterinarian Assistant. She completed her externship at the Humane Society of Albuquerque, where she assisted with over 100 spay and neuter surgeries daily. Melanie also worked at the shelter’s veterinary clinic, where she assisted with routine office visits, vaccine clinics, and various other medical cases. This is where she learned the importance of spaying and neutering and fell in love with the shelter world.

After relocating to Florida in 2012, Melanie knew she wanted to continue working at a shelter. She accepted a position as processing technician/intake kennel technician at Gulf Coast Humane Society. Before long, an opportunity to assist with spays and neuters became available, and in 2015, Melanie was promoted to Spay/Neuter Clinic Manager. In 2016, Melanie took part in a certification process through the ASPCA/Humane Alliance, receiving elite training for best practices in spay/neuter clinics.

In 2017, Melanie was promoted to Medical Manager, additionally responsible for Processing and Rehabilitation. Throughout her career, Melanie has assisted with over 70,000 spay and neuter surgeries. She has experience with multiple positions within the shelter, and we are fortunate that she brings this vast knowledge and experience with her to Cape Coral Animal Shelter and Veterinary Clinic. 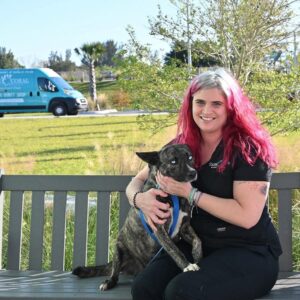 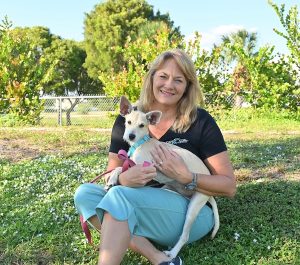 Kris began volunteering at Cape Coral Animal Shelter in August of 2020 as a dog walker.  As well as walking dogs several times per week, Kris volunteered at many of the events and any additional training opportunities.  It didn’t take very long for Kris to decide that the residents of Cape Coral Animal Shelter held a special place in her heart and felt called to do more.   Kris accepted a position as an Animal Care Specialist in July of 2021 and was promoted to Shelter Manager in October of 2021.  One of Kris’ favorite responsibilities is helping with the Adoption Meet and Greets and finding the perfect dog for potential adopters.

Kris had a successful 20-year background in the retail management industry with a specialization in Retail Photography where she held positions ranging from business owner and Photographer, to Store Manager and Division Manager.

Kris and her husband, Howard decided Cape Coral was going to be their retirement strategy in 2019 and moved here permanently in May of 2020 with their border collie mix, Brody, and mini Australian shepherd, Skye.

Gretchen Cuthbertson has been working in the veterinary field since 2006. After spending several years working with animals at large emergency vet hospitals and small independent general practice clinics, she discovered her true calling three years ago when she made the move to shelter medicine. She joined Cape Coral Animal Shelter in 2021 as Processing Supervisor.

Gretchen’s other passion is art. She received her bachelor’s degree in art from Pennsylvania State University, with a focus in painting and drawing.  Gretchen worked in the art field for several years before becoming a veterinary technician, and she now combines her two loves by painting pet portraits, many of which hang in people’s homes all over the country. 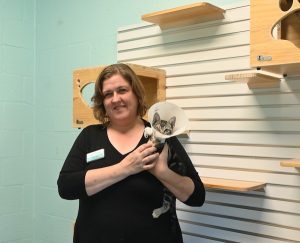 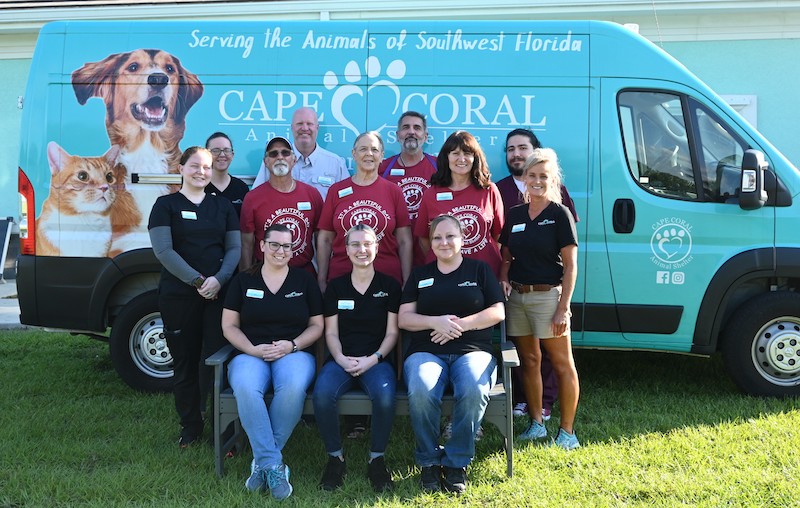 Cape Coral Animal Shelter is fortunate to have the very best team of Animal Care Specialists and volunteer Team Leads dedicated to the safety and well being of our animals and providing adopters with the a positive experience while adopting their forever friend. Every morning, 7 days a week, 365 days a year, we are here bright and early to start our daily routine of cleaning, disinfecting, feeding, medicating and getting our residents ready to hopefully meet their new family.  Our staff and team leads love and care for our residents as if they were their own, and many happy tears are shed when they leave our doors for their new life. 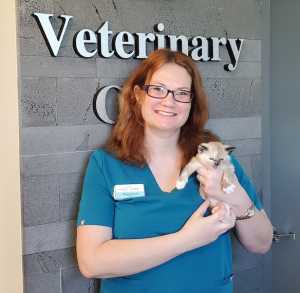 Dr. Megan Davis joined the Cape Coral Animal Shelter as Director of Medical Operations in April of 2022 and oversees the veterinary care for patients in our veterinary clinic as well as our shelter animals.

Megan Davis knew at the age of six that she wanted to be a veterinarian.  After moving to southwest Florida from the United Kingdom at the age of eleven, she continued to work towards her goal with dogged determination.  She obtained her Bachelor of Science and Doctor of Veterinary Medicine degrees from St. George’s University in Grenada, West Indies.  Her fourth-year clinical training was completed at the University of Florida and since graduating, she has worked for some of the most prestigious veterinary clinics and hospitals in our area.

Dr. Davis has always been an advocate for adoption and enjoys and appreciates the challenges of shelter medicine.  She has worked extensively with local rescues while in private practice and will continue to do so at our low cost, state of the art clinic.  She is excited to be a part of the Cape Coral Animal Shelter team and to be able to pursue her passion for helping homeless animals and pets in our community.

She resides in Fort Myers with her Japanese Chin, Emi, her hedgehog Mr. Tiggy Winkle, and three cats—Pippa, Tonks, and Paddington—all rescues, of course.

Dr. Mariah Bessette joined the Cape Coral Animal Shelter in June 2022. Mariah knew at a young age that she wanted to be a veterinarian when her family volunteered with local rescues. She obtained her Bachelor of Science in Biology and minor in Criminal Justice at Florida Atlantic University. Prior to obtaining her DVM at Midwestern University College of Veterinary Medicine in Glendale, Arizona, she worked at a local humane society. Dr. Bessette is passionate about shelter medicine and very excited to be a part of the Cape Coral Animal Shelter team. She resides in Fort Myers with her two dogs—Cali, a Labrador Mix, Tootsie, a Chihuahua, and two cats—Lilo and Stitch. 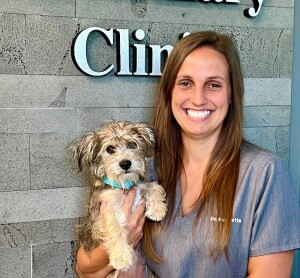 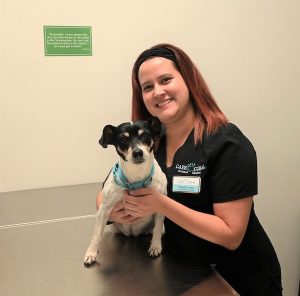 Yainerys Lima found the harsh winters of New Jersey to be too cold for her caliente liking, so the opportunities of joining Cape Coral Animal Shelter’s Veterinary Clinic as the Lead Veterinary Technician in sunny Florida, which she loves, felt like paradise to her and her mom.

Yainerys’ romance with America began in 1994 when, at the tender age of one, she was rescued, along with her mom, at the hands of the American Coast Guard because she was too sick to return to her native Cuba, where they had lived in a concentration camp. While Yainerys still has a dad and other family back in Cuba, she is quick to appreciate her good fortune in being able to immigrate here, grateful for the freedom of speech afforded her.

You would never know that Yainerys actually learned English after moving to Florida, because she speaks with a contagious flair, even chuckling frequently at the idioms which are often shared in the workplace.

In addition to an extensive background in veterinary medicine, Yainerys brings with her a sunny optimism, taking every opportunity to share her joy and good nature with her family, friends, coworkers, and patients. The thing she loves most about her patients is when they put their pets first.

In her spare time, Yainerys enjoys company with her boyfriend, her lively Chihuahua, Morkie, and her saltwater aquarium friends at home. She loves to draw and has painted many acrylics which she has gifted to friends. 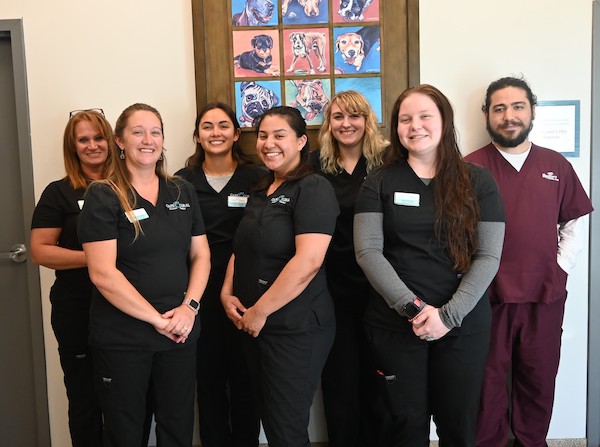 Our clinic staff is dedicated to providing the best veterinary care to the animals that come to our clinic and the best possible experience for their parents.  Treating animals, especially when they are not feeling well, is particularly challenging—they certainly can’t tell you where it hurts!  Our team of experienced clinic technicians treats each pet as if it were their own—with patience, compassion and understanding.

The tax identification number for Cape Coral Animal Shelter is #81-3632884, and qualifies under Section 501(C)(3) of the Internal Revenue Code. A copy of the official registration and financial information may be obtained from the division of consumer services by calling toll free 1-800-435-7352 within the state. Registration does not imply endorsement, approval or recommendation by the state.